“I believe God will let everyone into Heaven. He loves everyone!”

Arianna, a sophomore at the University of Minnesota, shared her beliefs with me as we sat at a coffee shop on campus.

We had met at our Destino information table a couple of weeks before that, when she ran excitedly up us wanting to know more about who we were and how she could get involved. I asked her to lunch on the spot, and we began meeting one-on-one. 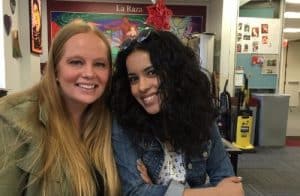 Arianna is majoring in global studies and writing, with the dream of hearing people’s stories. She believes every person, everywhere, has a story that deserves to be told, and she wants to write it, broadcast it, or find a way to make it known.

As she explained her dream to me, we connected instantly about how closely her dreams connect with who we are as Destino: journeying with students to follow Jesus and fulfill their God-given destinies.

She was excited to get involved with Destino and find Latino community on campus.  Originally growing up in San Diego, most of her friends had been Latino. Now living in Minnesota, she knew there were lots of other Latino students, but she didn’t know them. She shared with me that she felt like the only Latina student in most of her classes.

Arianna was also excited about growing in her faith.  She had struggled with relationships in her life for years, jumping from one relationship to another to fill her needs but never feeling full.  She shared this openly with me, knowing it was not what she really wanted or what she “should” do.

Living in a very religious family, her mom told her that because of the ongoing sin in her life, she needed to stop going to confession at church until she got her life back in order.  Arianna was sitting in a hard spot – feeling judged, unfulfilled, and wanting more.

Arianna also believed that a loving God wouldn’t exclude anyone from Heaven. From the professors she listened to, books she read, and conclusions she had come to, all roads led to the same God. As we talked over multiple lunch and coffee dates, though, she wanted to know what I thought.

Relationships are hugely important in the Latino culture.  We call ourselves the Destino familia for a reason.  Since I took the time to build a relationship with her, spend time together, and share my life too, she put value in what I had to say.  God opened the door to share the Gospel with Arianna, and she was hungry.

She had never read much of the Bible before and had never heard about the cost of sin in Romans 6:23.  She never knew why Jesus had to die or that she needed to make a personal decision to accept Him as her Savior and Lord. God had prepared her heart, and when she read the verse where Jesus said, “I am the way, the truth, and the life.  No one comes to the Father except through me (John 14:6),” she exclaimed out loud, “I believe that is true!”

Arianna is our new sister in Christ and is already telling her family about her decision!  She’s engaging other Latino students at our Destino events on campus and is excited to be a light for Him.